The origin of the appellation caramel is also disputed among food historians. The English word was adopted in the 18th century from the French caramel, but it is likely that the origin was the Spanish word caramel and this in turn could have come from an Arabic word.

When we think of caramel today, we usually have in mind a soft, creamy brown concoction made from sugar, butter and cream but, as usual, to get to this preparation a lot of travel was involved. What influenced the story of caramel more than any other factor was the history of its main ingredients, sugar and butter. 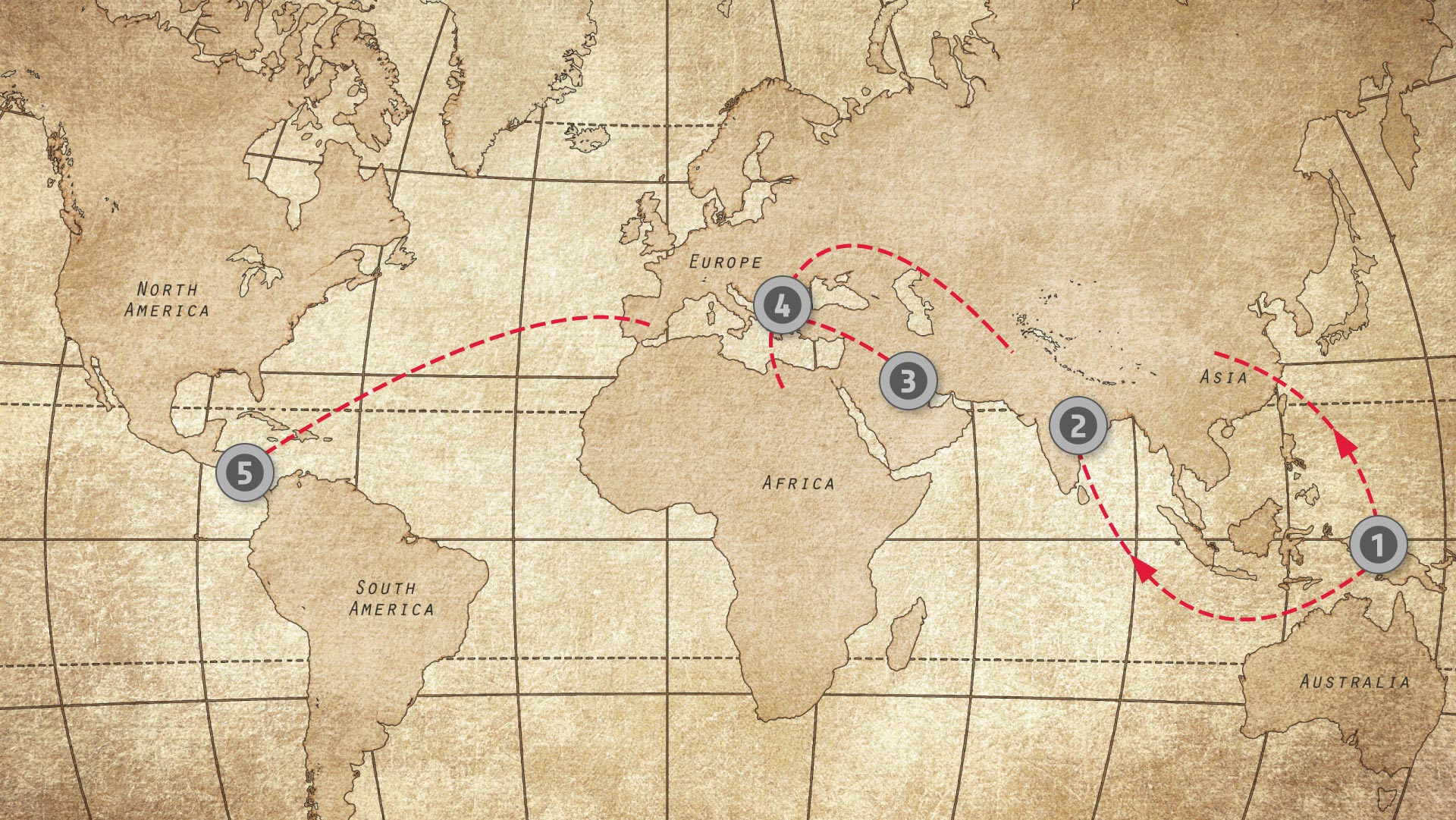 Sugar canes have been grown for 10,000 years in New Guinea.

In 300 BC, Alexander the Great brought honey powder to Europe.

The first sugar cane plantation was established in the 15th century in Central America.

Sugar and spice and all things nice

Archaeological evidence points to sugar cane first being grown domestically some 10,000 years ago in New Guinea, from where it spread to China and India. Around 500 BC, Indian farmers started making sugar syrup, which was cooled and moulded into large flat cakes known as khanda (candy), which made it easy to export.

The first contact Europeans had with sugar was around 300 BC when Alexander the Great’s soldiers brought back ‘honey powder’ from India, but the real turning point came when Arab traders discovered sugar cane in either India or Persia and began to cultivate it themselves in the Middle East and North Africa during the 11th and 12th centuries.

By the 15th century the first sugar cane plantations had been established in Central America and Europeans began to develop a passion for sugar. Although sugar cane became more available, it remained expensive because of the distances involved in transporting it. However with the establishment of growing and processing sugar beet during the 18th and 19th centuries, sugar became not just popular but also accessible.

A ball of sweet salt

The Arabs have always been noted for their love of sweets. Kurat al milh — a ball of sweet salt — was the name they gave to a sticky product extracted from thickened cane syrup; a designation reflected in our own term of caramel. In the 11th century, the Crusaders returned to Europe with accounts of mouth-watering sugar-based sweets and desserts served at weddings and religious celebrations.

However, it was on the other side of the world, around 1650, that American settlers are recorded as having cooked up sugar to become hard candies. And here we begin to see the development of two distinct preparations, both based on sugar, but which, yet again, would develop in distinct ways in different places around the world, namely caramel and toffee. Confusingly, the words are sometimes used interchangeably today.

In Europe, caramels were one of the earliest types of sugar-based sweets. It was Brittany, in north-west France, that became famous as long ago as the 14th century for its caramel au beurre salé (salted butter caramel).

There were two reasons for the development of caramel in Brittany. Firstly, the region’s excellent dairy products, especially milk and cream, but in particular its salted butter. Secondly, in 1343, King Philippe VI of Valois, had imposed a tax on salt, known as la gabelle du sel, but Brittany was exempted from the tax and so farmers could afford to use salt in the production of their butter. It was not long before salted butter was being used to make caramel, giving it a more distinctive taste but also, no doubt, attenuating the very sweet taste of the sugar.

Caramel has continued to be produced in Brittany and elsewhere up to the present day, but along the way there have been many interesting innovations. In 1977 chocolatier Henri Le Roux invented a new recipe by adding hazelnuts, almonds and walnuts to a slightly salty caramel, a recipe that would bring him international fame. More recently, he developed Sakura, a new cherry blossom caramel.

One of the favourite ways of enjoying caramel in the USA is as a caramel apple. Although candy apples had been a favourite at fairs and festivals in America since the early 1900s, it was a chance discovery that led to the more recent, but now equally well-loved recipe, for the caramel apple.

Dan Walker, a Kraft Foods employee was trying to work out how to use up excess caramels after Halloween. He decided to melt them down and dip apples in the mixture and voilà! A new preparation had been made. Initially the caramel apples were handmade, but in 1960 a certain Vito Raimondi of Chicago registered a new patent to make caramel apples by machine.

Caramel brought up to date

In the Americas, caramel is as popular today as it has ever been. It is enjoyed by young and old alike, whether as sweets, caramel lollipops, caramel apples, caramel cream or caramel coulis. Elsewhere, particularly in Europe, caramel seems to be making something of a comeback with new flavours being added to the basic recipes. Today’s chefs are also experimenting with new ways of using caramel fillings in sweets, desserts, cakes, muffins…

While General Lavalle was napping, a serving woman was preparing ‘la lechada’ for the camp. ‘La lechada’ is prepared by heating sugar and milk. The woman went to speak with General Manuel de Rosas in his tent, but when she entered she discovered the enemy. She didn’t know about the treaty the two generals were about to make, so she ran to find soldiers.

General Manuel de Rosas arrived moments before the soldiers, and stopped them from waking the sleeping General Lavalle. In the chaos, the woman forgot about ‘la lechada”. When she remembered, she noticed that it had become a dark brown jelly substance. It is said that a very brave and hungry soldier tried the jelly and then Dulce de Leche was born.

Mix all the ingredients together and push through a big sift. Cool down before crumbling on a tray and bake for approx. 15 min at 180°C. Cool down and put a layer on top of baking paper in the mould.

Mix all the ingredients for 3 min at medium speed. Mix the Deli Caramel* in at the end.

Mix all the ingredients together and use it as a topping on the cake.

Prepare the moulds with the baking paper. Fill the bottom with the baked Puravita crumble. Pipe a thin layer on top of the crumble and spread a layer of Deli Caramel*. Add another layer of cake dough and finish with the almond topping. Bake at 180°C for approx. 45 min on double trays, close damper. Decorate with icing sugar.

Deli Caramel is a unique product made of milk and sugar, carefully cooked together like our grandmothers did.

The authentic taste of caramel will be your ultimate secret for all your recipes with caramel filling.

An authentic and strong taste of milk and sugar.